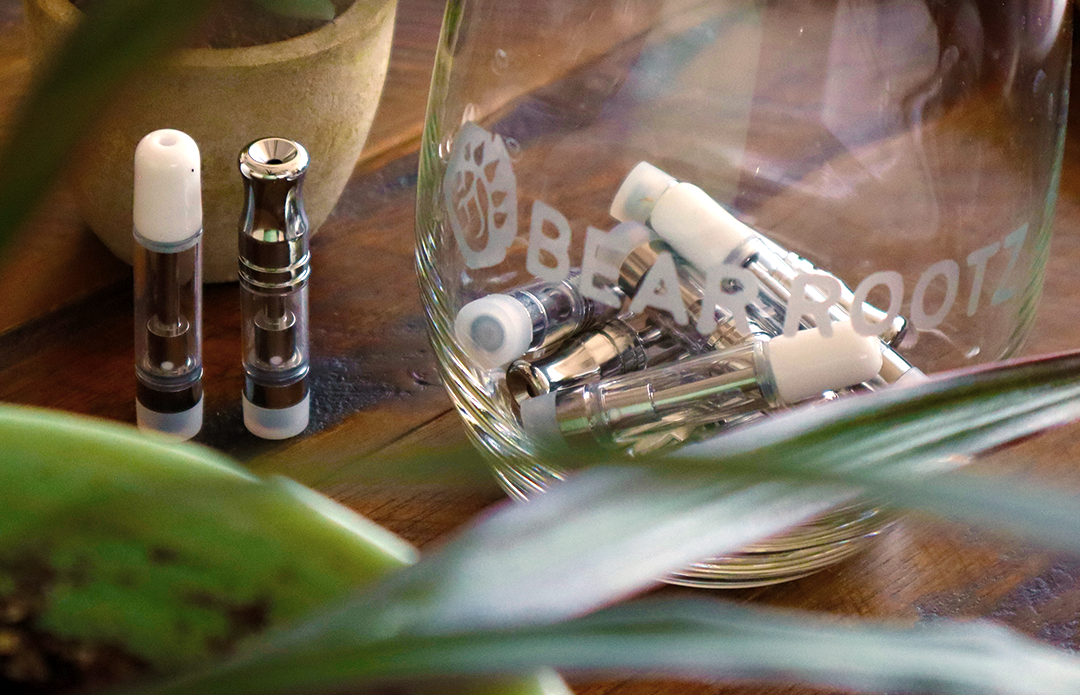 Have you ever wondered about the history of vape cartridges? What’s inside them and how do they work? We’ll go over what a vape cartridge is and talk about why it was invented. You might be surprised to find that vaping is actually an old idea!

The Start of Vaping

To understand the modern-day cartridge, we need to take a brief look at the history of Vaping, the seed to the invention of the Vape Cartridge.

Vaping or inhaling vapor, as a process, has many historical mentions dating as far back as 5th century B.C., over 2,500 years ago, to the Scythian Civilization[1]. This time period’s process of vaping was executed by heating herbs over hot stones which then produced a natural vapor to inhale.

Fast forward about 1000 years and a man by the name of Irfan Shiekh of the Moguls came up with the first water pipe[1]. The name given to this contraption roughly translates to “hookah” (See Figure 0.1) The device would use hot coals to heat up different herbal mixes beneath a hot plate which would then produce an inhalable vapor through a hose.

In India, near this same time they were developing a similar object known as the Chillum, although it was not as refined as the Hookah, these two are often referenced as the original vape/smoke technologies. These early devices and others very similar were used throughout the world for hundreds of years before anything resembling the vape pen, as we know it, comes into play. 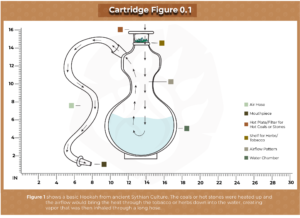 Joseph Robinson and the First Vaporizer

The next major technological leap for the vaping process happened in 1927. Approximately 2,000 years after the first Hookah Vapor Pipes, the invention of the first hand-held vaporizer came into the world, which is credited to Joseph Robinson.

Joseph Robinson is the father of vaporizers. Most people have never heard of his name but he in fact held the first patent ever for a vaporizer device, in 1927[2]. Although different from what they are now, this vaporizer had many similarities such as holding tanks for heatable liquids, heating components to produce vapor as well as airflow tubes to control the vape flow in a singular direction. See Figure 1. 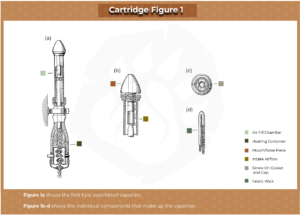 Joseph Robinson developed this technology during the Prohibition time in America and cigarettes were vastly popular in American culture but the vaporizer wasn’t. We attribute this fact to be most likely due to the major health concerns of smoking vs vaping, which had yet to be further explored and explained and took several more decades to really come to a head.

Alternative to a technology for casual smoking, the original vaporizer technology found a market demand in various medicinal purposes as a way to keep your lungs wet to help with colds, flus, and sinus infections.

Unfortunately for Joseph, this 1927 Vaporizer Device became obsolete before ever gaining popularity as a consumer smoking technology.

It took another thirty years for someone to improve upon Joseph Robinson’s idea, although he applied for many other patents to build upon his initial idea during 1927-1960. It is important to note, however, that his first prototypes did have a container to hold liquids[3]. This is the first resemblance of a cartridge. See Figures 2 and 3 for some variations to Robinson’s patent over the years. 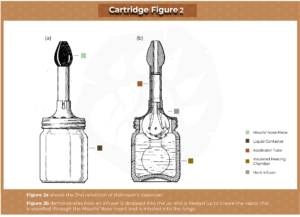 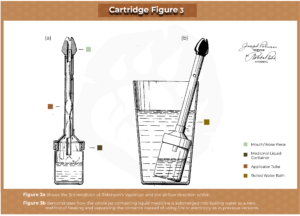 By the ’60s, smoking had become an increasingly popular pastime but new concerns were starting to surface about how healthy it was to inhale smoke.

A man by the name of Herbert A. Gilbert decided to create a new device that would help people stop smoking[4]. This device was known as the “Smokeless Non-Tobacco Cigarette”. In his patent breakdown, he referred to the holding tank of his device as a cartridge.

This is the first known time the tank or holding reservoir of a vaporizer was coined as such.

The device was designed to be hand-held and operated using a battery or electricity (Figure 4). It was described as a device that utilized “heated, moist, flavored air”[7]. Although closer to the modern vape cart, this Cartridge was mounted onto the body of the Smokeless and was not detachable once assembled. The Cartridge was only a tank that could be filled with liquid. Again, the device did not sell and was ahead of its time. 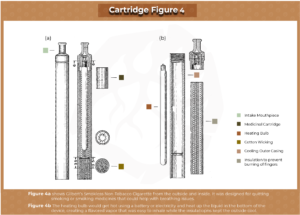 The Modern Vape Pen and the Cartridge

40 years later, in 2003, the Modern Vape pen really got its start. A Chinese pharmacist named Hon Lik was inspired to create a smokeless cigarette after the passing of his father from Lung cancer. He says he “had a dream that he was drowning in water and it suddenly turned into a vapor that he could breathe in”[5].

From that moment on, he devoted his time to developing a healthier alternative to analog cigarettes. The prototype had a mouthpiece/reservoir combination with a battery body attached (Figure 5). The prototype was cigarette-sized and could only be used once. The significance behind this first Cig-a-like is the size and component layout. All other E-cig pens were fashioned after this initial concept. 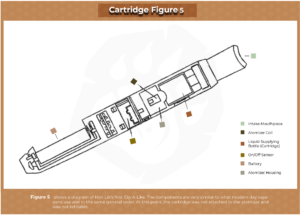 From 2003 to 2006 Lik’s Cig-a-like became popular in Europe and Asia. By early 2007, the first generation of e-cigs was introduced into the United States[3]. By late 2007, two British Entrepreneurs, Tariq and Umer Sheikh (Brothers), invented and applied for the first Cartomizer patent[1] (See Figure 6).

The most significant difference between Lik’s cartridge reservoir and this new cartomizer was that the atomizer (heating element) was directly integrated into the reservoir that housed the e-juice. The reservoir was still attached permanently to the battery. Shortly thereafter, an e-cig company, Kanger built their version of the Cartomizer. 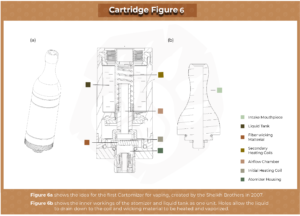 In 2010, Joyetech, an e-cigarette company, released the eGo vape pen[6]. The reservoir housed the Atomizer (heating element) and was attached to the mouthpiece. Later in 2010, the Clearomizer appeared on the market as a leading contender of the original Cartomizer. The Clearomizer was the first prototype of the modern cartridge[2].

The whole atomizer, including the coil and wicking system, was in a detachable and clear reservoir, making it an all-in-one cartridge. The earliest clearomizers were made of clear plastic, hence the name clearomizer. The coil was surrounded with cotton material that soaked up the e-juice or herbal oils (See Figure 7). 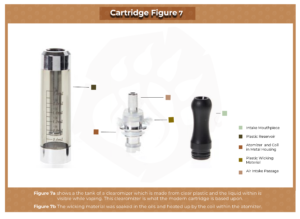 Take a moment to reflect upon what has been discovered thus far.  Up until now, all of the advancement in the vaping industry has been in e-cigs and has not been used medicinally or with other natural plant derivatives. In the early ’90s, farmers grew their own herbs and experimented with the medicinal properties of the plants. “Eagle Bill” was one such medicine man who practiced the use of natural botanical vaping to soothe ailments such as the pain and lack of hunger associated with cancer.

Eagle Bill created a safer vaporizing device after seeing a Botanist using a heat gun to boil plants in water and inhale the vapors. he gleaned ideas from the first vaporizers of the Scythians and Egyptians[1] and invented the “Shake and Vape”[6] (Figure 8). The Shake and Vape inspired a Canadian company, BC Vaporizer, to make an electrically charged version of the device. 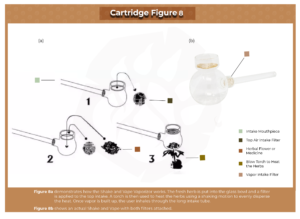 Cartridges in the Modern Medicinal Industry

Once e-cig vaporizing pens were invented and perfected in the early 2000s, growers of hemp and its other derivatives, began making changes to the cartridge so that it could handle the viscosities of various botanical herb oils. These alterations led to the explosion of the herbal vaporizing industry. The first company to successfully alter and sell the vape pen for this type of use was O.Pen in 2013[7]. The cartridge was made of plastic and housed a fibrous plastic wick and metal coil (Figure 9).

Extracts were cut with PG (Propylene Glycol), a vaporizing agent that made botanical herb oils or concentrates thinner and easier to vaporize. The main issue with this cartridge was the burnt taste that came after most of the oils were vaporized and the coil was burnt from multiple sessions. The initial burnt taste, along with a plastic aftertaste due to the materials used to construct the reservoir, left much to be desired. 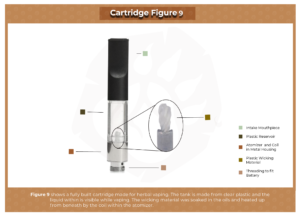 Botanical herb-producing companies began establishment all over Europe and in America, taking the cartridge and improving upon the design as technology advanced. Drastic changes have been made to the original designs of the cartridge and continue to be improved upon today. Cartridges are available in Polycarbonate Plastic, Borosilicate Glass, Quartz Glass, and Resin options. Wicks and wicking materials are becoming more obsolete as better materials and designs are being invented.

The modern Cartridge usually is wick-less and has aperture holes in the atomizer housing for the botanical oils to flow through to the coil and heat up. Coils are being made from several different materials such as ceramic, and quartz. Ceramic coils are the industry favorite for atomizers. A wick is no longer needed to soak up the oils and the ceramic heats faster and more evenly without leaving a burnt taste behind. See Figure 10 for a breakdown of a modern cartridge. 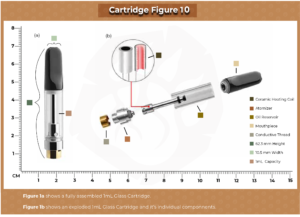 While Cartridges are still relatively new to the vape industry, vaping dates back over 2,500 years ago to the ancient world. Egypt-based Scythians came up with the first device, the Hookah[1], and inventors further developed their versions based on those concepts. Many inventors, Joseph Robinson and Herbert A. Gilbert included, were ahead of their time with vaporizer patents, yet the idea for an e-cigarette did not fully come to fruition until the early 2000s. Once Hon Lik perfected the Cig-a-like, vaporizing started to flourish.

Although the Cig-a-Like and other vaporizers had a reservoir for e-liquid, it wasn’t until 2007 that the cartomizer was invented. This led to massive growth in the vape industry that has continued to this day. The Clearomizer, the prototype for the modern cartridge, was born from this frenzy to perfect vaping.

Botanical Herb establishments took notice of these advancements and began modifying the vape pens and Cig-a-likes to be used with hemp and its other derivatives. Most carts on the market today are wickless and manufacturers are utilizing new materials such as ceramic coils to achieve the optimal vaping experience.  Technology is still expanding the possibilities within the herb-based industry.

[6] Prashant Sharma (2015). “A Modern Device with an Illustrious History”. Techpluto.com 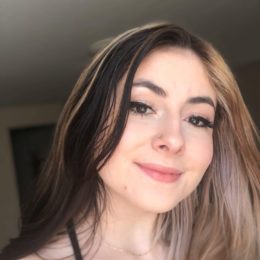 Christina PetersonChristina is an avid graphic designer, copywriter and smoke/vape enthusiast. Her passions and experience lends to unique insights that are typically grazed over by the average consumer.
Posted in:
Education
Leave a Reply Cancel reply
Quick Links

Products are intended for use with legal herbs only. Adult signature is required upon delivery. The statements made within this website have not been evaluated by the U.S. Food and Drug Administration. These statements and the products of this company are not intended to diagnose, treat, cure or prevent any disease.